No break for KIZ

Although June, July and August are typically seen as “Summer Break” months, the sorors of Kappa Iota Zeta have been busy throughout the summer with various activities.


KIZ kicked off the month of June with a Z-HOPE project at the Cosby Spear Highrise in Atlanta. Sorors met with the residents and participated in Older Americans Month Celebration and Bingo Night. The theme was “Unleash the Power of Age”. Sorors found themselves reflecting and become inspired throughout that night.  June also marked the start of our 2013 Making Strides Against Breast Cancer Campaign. The chapter Walk Team is in fundraising mode and preparing for the upcoming walk on October 26, 2013. 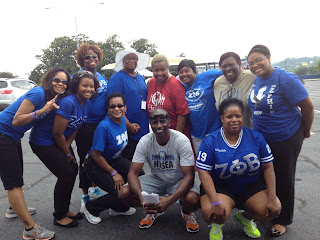 The service continued in July with our on-going partnership with the City of East Point. KIZ sorors worked as volunteers at the East Point Independence Day Festival on July 4th. The chapter also had the opportunity to serve once again with Hosea Feed the Hungry and Homeless at their Back to School Jamboree. Sorors also took part of July to participate in the Zeta Organizational Leadership Conference in Indianapolis, Indiana; during which future leaders of Zeta gathered for 4 days of intensive leadership training as well as for organizational updates.

KIZ sorors are living up to the principles of Scholarship, Service, Sisterly Love, and Finer Womanhood and look forward to a successful 2013-2014 Sorority Year.

Keep up the good work ladies!
Posted by Unknown at 6:06 PM