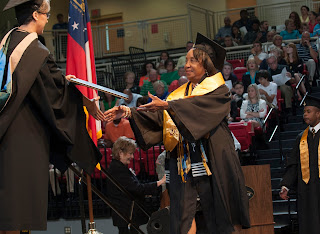 Named Student of the Year 2011-2012, she received one of the first Presidential Diversity Awards for her work on a potential KSU childcare facility.  The proud grandmother of three is a member of Golden Key International Honour Society, National Society of Collegiate Scholars, Delta Epsilon Iota Academic Honor Society, and Who's Who Among Students in American Universities and Colleges. She currently works as a student assistant in the Life Long Learning Center.  On August 5th, Amica Lowe-Rockett will begin a new position as Administrative Associate I in the Volunteer Kennesaw State University Unit (VKSU) of the Student Development Department.