On Sunday August 28, 2016, Phi Omicron Zeta expanded, once again, its outreach to the youth by launching another auxiliary, the Pearlettes, thereby increasing membership across the three youth auxiliaries by eighteen. Phi Omicron Zeta has added a new youth auxiliary each year for the last three years. With each new auxiliary, Phi Omicron Zeta also adds new initiatives.  This year the chapter is adding a study hall and a mentoring program.  Look for good things to come throughout this sorority year from these three groups of beautiful, smart, talented and poised young girls and congratulation to the nine new Pearlettes!
Posted by Unknown at 9:36 PM

The Ladies of Rho Epsilon Zeta Chapter have been very busy this summer. Fostering the ideals of Scholarship, Service, Sisterhood and Finer Womanhood, Rho Epsilon Zeta has been out in the community making a difference:
Divine Nine 5K Atlanta – June 11, 2016 – Welcome All Park
The Inaugural Divine 5k Walk/Run issued a call for all Metro Atlanta Greeks, friends and family to walk, jog and run for the cause to benefit NPHC of Greater Atlanta’s community programs and scholarship fund. 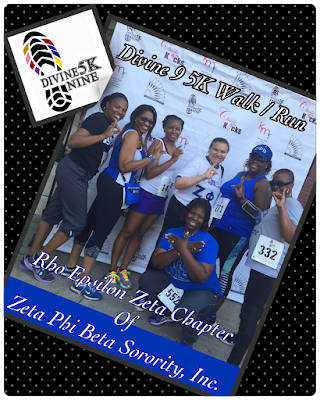 Alpha Kappa Alpha 2016 Boulé THINKHBCU EXPO – July 9, 2016 – Georgia World Congress Center
THINKHBCU is an International campaign to bring awareness and financial support to HBCU’s. Students were asked to consider attending historically black colleges and universities and learn about the benefits and contributions HBCUs make to society. Greek organizations were there to share information about their programs and scholarships. 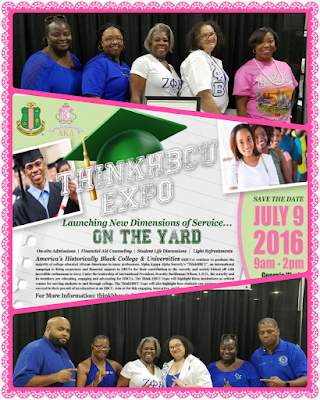 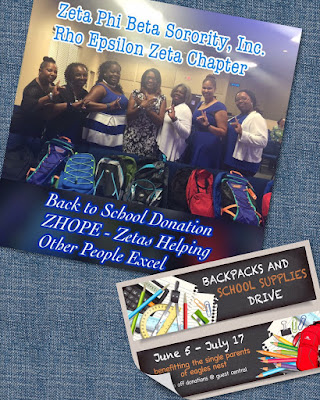 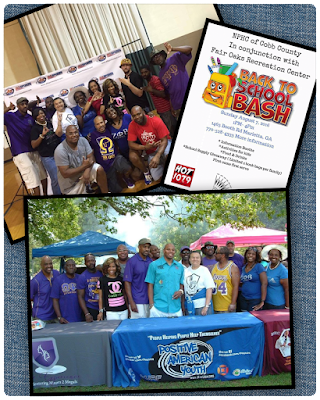 Omega Psi Phi – Drive 4 Knowledge Charity Golf Classic – August 26, 2016 – Marietta City Club
The Brothers of the Chi Gamma Gamma Chapter held their 26th Annual Golf Tournament to raise money in support of the 2nd Century Invictus Fund, which supports and enhances educational opportunities for youth and young males in the service area of the foundation. Volunteers were at every hole during the tournament ensuring this event was fun for all who attended while raising funds for a worthy cause. 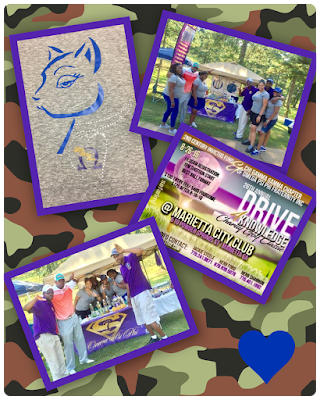 Steve & Marjorie Harvey Foundation – Girls Who Rule the World College Expo –September 16, 2016
The Steve & Marjorie Harvey Foundation created Girls Who Rule the World to enhance the development of young girls and provide a forum to expose them to the benefits and importance of positive self-image, responsible personal conduct, respect for self and others, educational achievement and cultural enhancement. The Mentoring Weekend is comprised of 100 young women ages 13-18 from the Metro Atlanta area. Rho Epsilon Zeta Chapter distributed scholarship applications and talked to parents about Zeta Phi Beta’s youth auxiliaries. 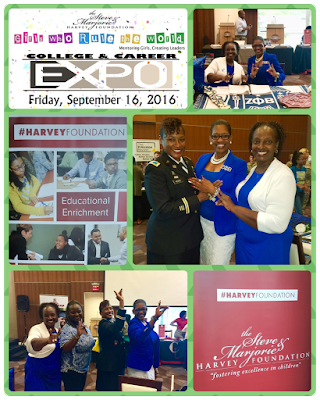 Freemont Foundation 5K Walk/Run – September 24, 2016 – Grant Park
Created as a legacy of Dr. James McKinley Freemont, Sr., the Freemont Foundation awards scholarships to deserving students attending institutions of higher learning. A select group of Atlanta-area fraternities and sororities were asked to be involved with public service in the community while celebrating education and fitness. Volunteers assisted with race day activities including registration, course marshals, food and water stations, set-up and clean up. 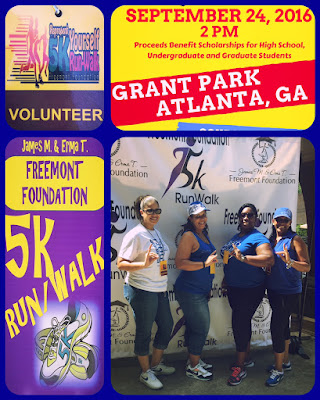 In the month of September, the Oh-So-Marvelous Omega Mu chapter held an awareness table in the campus student center at Mercer University. Passing students were able to watch the “This is Who We Are” video via the national website in order to learn about Zeta Phi Beta Sorority, Incorporated and the reasons and ways we are striving to bring about hazing awareness and prevention. 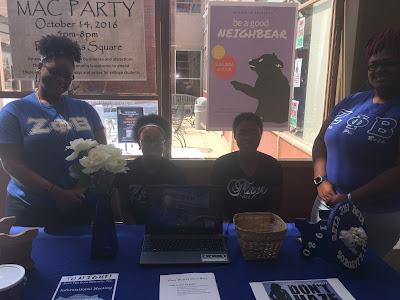 During this month, we also utilized the social media graphic “Finer Women Don’t Haze” as a part of the Z-HOPE initiative to raise awareness of our Finer Women Don’t Haze Campaign and inform fellow students that Zeta Phi Beta Sorority, Incorporated is an anti-hazing organization. 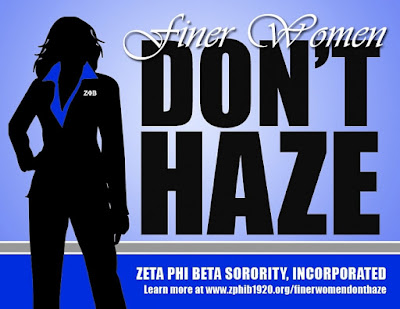 On September 16, the chapter participated in the Mercer University’s National Pan-hellenic Council Week. This week included a church service, a Q & A session called “Why We Don’t Rush,” a talent show, a yard show, and a community outreach through donations to Loaves and Fishes. 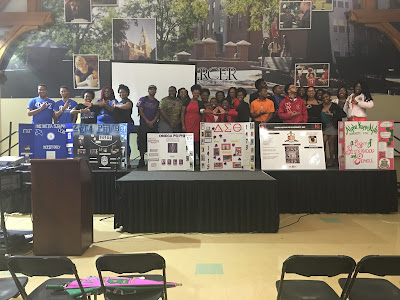 Finally, concluding events for the month of September, Omega Mu plans to work with the other sororities of the National Pan-hellenic Council and Panhellenic Council to increase visibility for the social sororities on campus through Mercer’s first ever, Greek Women’s Week. This week, September 26-30, will consist of service opportunities to raise funds and items for the Crisis Line & Safe House. We will also host positive and empowering social events with these organizations to engage the student body.


Our chapter also plans to have a women’s health and awareness event focusing on Polycystic Ovary Syndrome (PCOS) on September 29 at 7:20PM. This event will consist of a brief informative presentation about the hormonal disorder followed by local physicians and testimonial guest speakers.
Posted by Unknown at 7:05 PM

A Blue and White Welcome 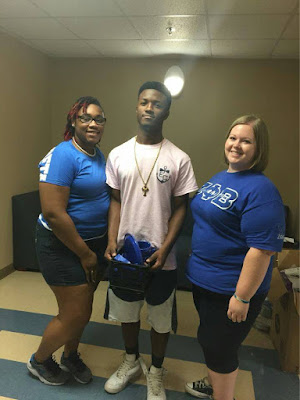 The Mu Mu chapter at Georgia Southwestern State University had the opportunity to help first year students move into the dorms on August 13, 2016. Soror Sarah Allen and Soror Crystal Thompson greeted new students and their families when they arrived early that Saturday morning with a smile and helping hand. The chapter members unloaded cars, helped take items to rooms, and surprised some family members of Sorors with welcome gifts. The chapter felt like it was a wonderful way to begin the semester and can’t wait to see what the rest of the year has in store!
Posted by Unknown at 6:56 PM

Omicron Nu Chapter on the Move! 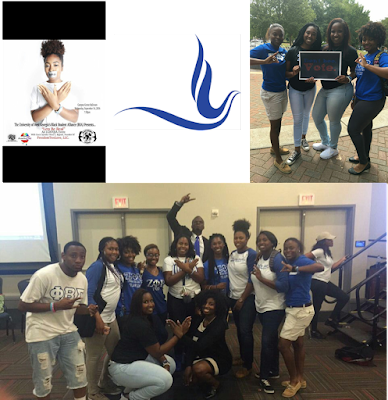 With only a little more than a month in, Zeta Phi Beta Sorority, Inc., Omicron Nu Chapter at the University of West Georgia has been on the move.  September has been a big month as Omicron Nu helped prepare for and participate in the university's NPHC week. While on the yard this month Zeta Phi Beta has helped in registering fellow students to vote, and working ‘My Brother's Keeper’, an event that collected funds and toiletries for those affected by the Louisiana floods. Not only have they been getting out into the community to help but they have been hosting their own events, such as their Zo Zweet Ice Cream Social to interact and build social relationships with the general student body. Even still, the months is not over yet and the chapter has a few more events they're doing including a bake sale, hosting ‘For My Cyster’ - an event raising awareness for National Polycystic Ovary Syndrome Month, and lastly assisting their brothers of Phi Beta Sigma Fraternity, Inc. at their annual ‘Sleep Out for the Homeless’ event 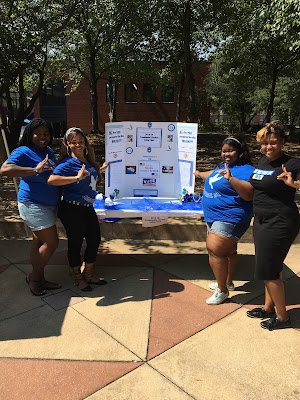 'The 'Beautiful' Beta Iota Chapter has been active in making a change in the West End community and AUC community as soon as we returned from summer break. In September, we focused on Voter Registration and Voter Education. We partnered with our Student Government Association to register approximately 1,000 students to vote in the upcoming election. Additionally, our school hosts an event called Market Friday where vendors sell items to students and campus visitors. They also allow student organizations to host tables as well. We gave out information of how to prepare for Election Day and what a person needs to do in order to be able to vote. We also gave information to those who were not yet registered and helped them find where to get an absentee ballot if they were registered at home and did not want to change their residence to Spelman College. On that day, we reached approximately 70 people who were willing to stop and get the information. We are very adamant about voting, not only in the presidential election, but for local, state and any others. We want to see a change in our community so we need to make sure that those who are elected need to be for all people and not biased. #GETEngaged #SpelmanZetas'
Posted by Unknown at 6:43 PM 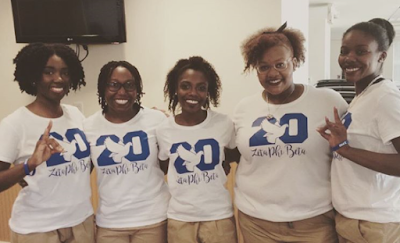 On August 16, 2016, Zeta Phi Beta, Sorority, Inc., Theta Rho Chapter, participated in the NPHC Divine 9 Greek Yard Show. The event happened during the Kennesaw State University’s Week of Welcome, which is a week full of events to get new students and returning students involved and engaged on campus. The Yard Show showcased not only the National Pan Hellenic Council, but also the Multi-Cultural Greek Council as well. Theta Rho members Krista Venzant, Bryana Pettus, Shomari Walcott, Jasmin Douglas, and Olivia Goodridge participated in the showcase and performed.
Posted by Unknown at 6:38 PM 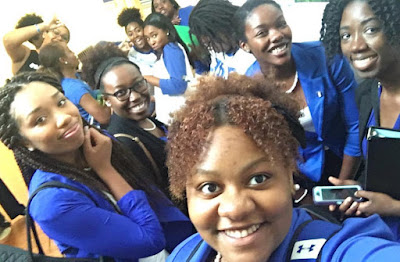 Theta Rho attended the 2016 State of Georgia Undergraduate Retreat on August 27, 2016 at Columbus State University. The workshops on Chapter Branding, Budgeting, and Running more efficient meetings were very informative. The retreat was a wonderful learning and networking experience. Before we left, we grabbed a group selfie with Omicron Nu.
Posted by Unknown at 6:35 PM 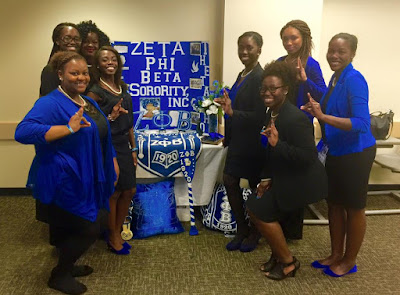 Kennesaw State University held its NPHC week August 28 through September 1, 2016. The Wednesday, August 31, 2016, event was Convocation. The purpose for this event was to have an interactive, open forum where members of the NPHC could answer questions about their prospective organizations. Each organization was designated a room, while registered students traveled to each room to learn more about each organization. The sponsoring graduate chapter, Rho Epsilon Zeta helped with the lovely table display.
Posted by Unknown at 6:16 PM 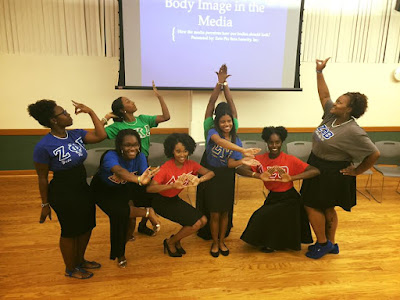 On Tuesday, August 30, 2016, the sororities of the Divine Nine at Kennesaw State University held its Real Talk, Girl Talk event for NPHC week. The purpose of this event was to bring women together for an open discussion on an array of co-related topics to ultimately empower women while showcasing Greek unity. The Theta Rho chapter’s representatives, Jasmin Douglas and Bryana Pettus, focused their portion of the discussion on “Body Image in the Media.” By the end of the discussion all the women walked away with a new sense of self-love.
Posted by Unknown at 6:16 PM